Caracal and serval research in Tanzania 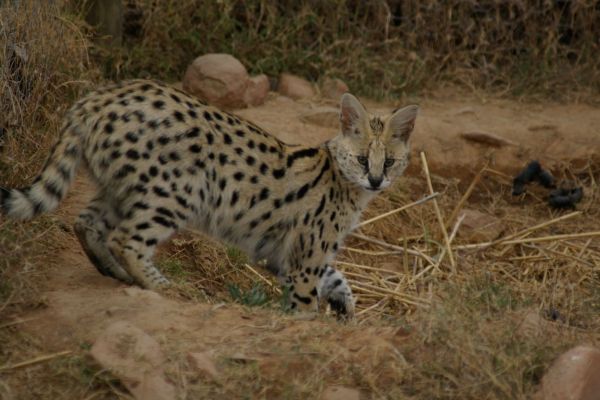 Spatial and temporal overlap of caracal and serval in Serengeti National Park, Tanzania

Understanding activity and habitat use are important for identifying mechanisms facilitating species co‐occurrence. We studied habitat use and activity patterns of caracals (Caracal caracal ) and servals (Leptailurus serval ), primarily nocturnal, mid‐sized felids that prey extensively on small mammals and co‐occur in portions of sub‐Saharan Africa. Spatial and temporal patterns of segregation were investigated in a 1,085‐km2 area of Serengeti National Park, Tanzania from 2010–2012. We used occupancy analysis to quantify habitat use and kernel density estimators and Mardia–Watson–Wheleer tests to analyse activity patterns. We found evidence for habitat divergence but high temporal overlap between species. Servals selected for grassland and avoided shrubland and wooded grassland. In contrast, the findings showed that caracals avoided grassland and woodland–shrubland; however, 73% of caracals were detected in wooded grassland. Overall, caracals and servals co‐occurred independently, Species Interaction Factor, (phi = 1). This indicates that differential use of habitats in part facilitated coexistence of caracals and servals. Proper management of the declining grasslands including other habitats are recommended to facilitate continued coexistence. Additional studies, including feeding ecology, would be important to further understand mechanisms facilitating coexistence between caracals and servals.