Diet of serval ( Leptailurus serval ) on farmlands in the Drakensberg Midlands, South Africa 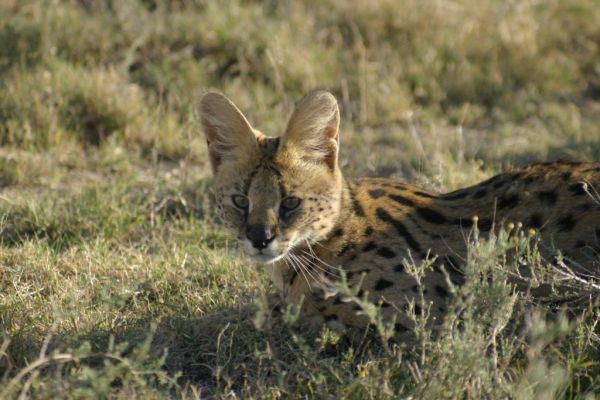 Diet of serval ( Leptailurus serval ) on farmlands in the Drakensberg Midlands, South Africa.

Abstract
The feeding ecology of a wetland specialist,the serval (Leptailurus serval), is poorly documented inregions subject to changing land use patterns. In thisregard, we investigated the diet of serval by scat analysis from May to August 2013 at farmlands in the Drakensberg Midlands, South Africa. We recorded 17 species of prey remains in its diet, which included 10 rodent species, wild ungulates, the small-spotted genet ( Genetta genetta ), grass, birds, reptiles, and insects. In terms of rodent biomass consumed, serval mainly preyed on Otomys auratus (57.8%), followed by Rhabdomys chakae (13.4%), Dasymys incomtus (11.4%), and Gerbilliscus brantsii (5.9%).

In addition, we compared the diet of serval in our study with that of a 20-year-old research in the same landscape. Small mammals were the main prey
items of serval in both studies. Despite the high diet overlap and low variation in trophic niche breadth found in these studies, biomass consumption of rodent species varied considerably as servals were reported feeding on reed buck (Redunca arundinum), perhaps on fawns, in the present study. This feeding behaviour is probably related to the conversion of wetland habitat for agricultural activities. Given that wetland habitats support large populations of small mammals, which serve as prey for
servals, wetland conservation is important in a mosaic agricultural landscape.