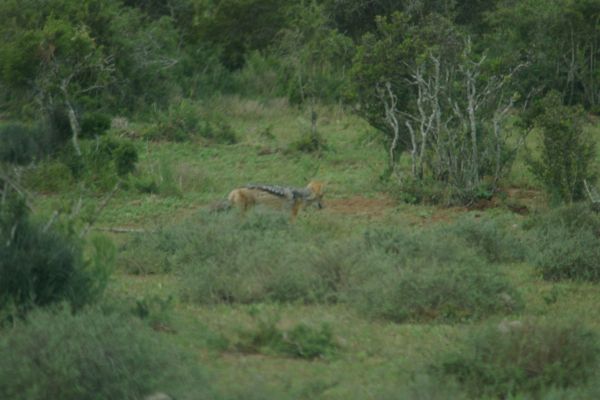 Ongediertes: A critical qualitative study of farmer–black-backed jackal conflict and its management around the Square Kilometre Array core site in the Northern Cape, South Africa

Abstract
This dissertation explores farmer–jackal conflict and the most effective way to manage this relationship in the context of the Square Kilometre Array (SKA) radio telescope in the Karoo and the human–human conflict surrounding it locally.

The erection of the SKA radio telescope has drawn international attention to South Africa’s semi-arid Karoo region because of the astronomical significance of its science agenda. To ensure the optimal functionality of the Array, the South African state has purchased farms totalling approximately 130 000ha, which have been withdrawn from sheep production and placed under conservation management. Commercial farmers neighbouring the SKA core site have voiced concerns that this is threatening their livelihoods and the local economy; a major concern is that the park will become a haven for black-backed jackals which predate on their sheep.
Using critical realism and political ecology for my theoretical framework, and drawing on the literature on human–wildlife conflict and social capital, I explore farmer–jackal conflict around the SKA core site and the proposed nature reserve. My primary research findings reveal the different understandings of jackals among the actors involved in jackal management, as well as the significance of the characterisation of jackals as ongediertes (literally, non-animals) in popular culture. I also show how power relations around knowledge production in jackal management are exercised, in particular the dominance of scientific knowledge over local knowledge, and consider the role of jackal management in collective action.
My research methodology was qualitative, including semi-structured interviews with a variety of individual actors as well as extensive participant observation over a period of four years and documentary analysis, including on the history of sheep farming and conservation in the Karoo. My findings show that farmers’ perceptions of themselves as losing their autonomy and struggling to control jackal predation have been exacerbated by the arrival of the SKA; their struggles against the SKA and the jackal have thus become fused in complex ways, lending support to the idea of the jackal as a trope for the larger developments around the SKA. In this unequal relationship, the farmers find themselves dictated to not only by the professional scientific elites involved in jackal ecology but also by those involved in the yet more powerful science of radio astronomy. Both jackals and the SKA contravene farmers’ understanding of the ‘natural’ order in the Karoo, in which man controls nature (i.e. non-humans) to serve his needs, and undermine their former dominance. Farmers in the Kareeberg are struggling to re-assert their authority; in this context jackals are the one thing in their immediate environment which they feel they still have agency over and, as a result, the jackal has become the focus of farmers’ frustrations.
This dissertation concludes that effective management of human–jackal conflict around the SKA core site (and thereby of the human–human conflict to which it is linked) requires an investment in building interpersonal and institutional trust as well as drawing on the resources of both scientific and local knowledge.