Impact of farmland use on serval in South Africa 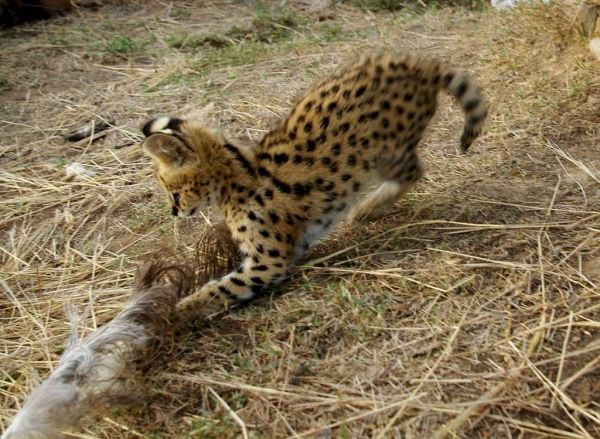 The Drakensberg Midlands, South Africa are experiencing unprecedented levels of habitat change. Despite the serval (Leptailurus serval) being a near-threatened wetland specialist, no studies have investigated their response to land use. To assess their abundance, we used camera trapping at 3 sites differing in intensity of farmland use with capture-recapture models. A total of 1,320 camera trap nights across the 3 sites yielded 26 and 28 servals. We detected no major difference in servals/100 km2 among the 3 sites using spatially explicit maximum-likelihood (7.6 ± 2.3; 6.5 ± 2.7; 6.5 ± 2.6) and Bayesian (7.7 ± 1.6; 6.2 ± 1.9; 6.9 ± 2.1) methods in sites A, B, and C, respectively. Servals were mainly crepuscular and nocturnal. The Mardia-Watson-Wheeler test showed significant difference in activity in A and C compared with B, whereas it showed no difference between A and C. Servals avoided activity during the day in the intensively farmed B. Abundance analysis at the broader habitat scale may not have detected variation among sites. Differences need to be tested at smaller spatial scales. The statistical approaches in this study provide the 1st robust estimation of serval population size. This estimation of a medium-sized felid with changing land use can assist their management and conservation.