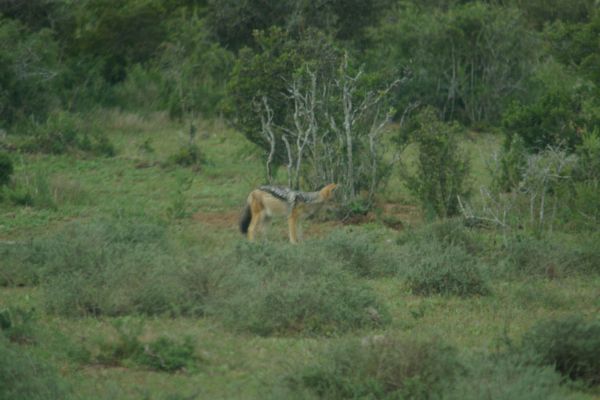 Abstract
An animal’s ability to traverse a landscape and utilise available resources is vital for its survival. The movement patterns of an animal provide insight into space use, activity patterns and ecological requirements that are imperative for successful farming and wildlife management practices. Home ranges are often used as a measurement of space use, which provides a quantitative value of an animal’s movement patterns in relation to various biological factors. A factor that is often overlooked in the analysis of movement patterns is the effect of moon phase, despite its known impact on the activity and hunting success of nocturnal predators. We live-trapped, radio-collared and monitored five black-backed jackals (Canis mesomelas) in the Golden Gate Highlands National Park, South Africa, between 2018 and 2019 to determine the impact of various environmental factors on movement patterns. Annual home ranges varied between individuals, were larger in subadults and overlapped between three jackals. Space use and travel velocity suggested a crepuscular activity pattern with a reliance on nocturnal activity and limited diurnal activity. Individual space use suggested variation between moon phases, although overall variation was negligible. Jackals travelled farther during new moon, compared with full moon, with the most notable difference between 23:00 and 04:00. Our results suggest that jackal behaviour does not align with the predation risk hypothesis. Space use and travel velocities varied between seasons, possibly because of differences in activity during mating and pupping periods. Our study confirms the flexibility in jackal space use and suggests a possible relationship with moon phase. To properly understand movement patterns at an individual and population level, we encourage additional research about jackals and various environmental factors via multidisciplinary collaborations.