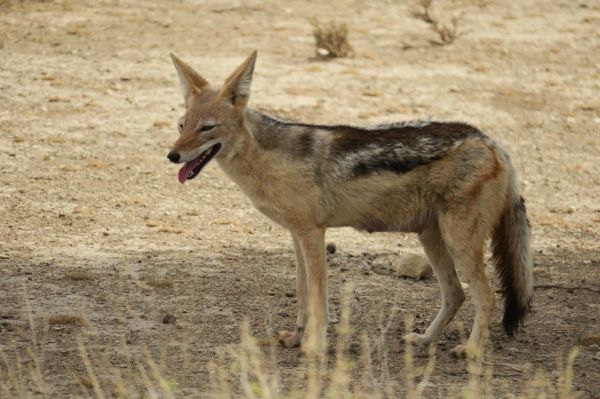 Lethal carnivore management, aimed at reducing carnivore impacts, is a global phenomenon threatening the persistence of many carnivores. In South Africa, carnivore persecution escalated during the expansion of pastoralism and the introduction of modern technology. Consequently, most large carnivores have been extirpated from much of their historic ranges (e.g. lion, hyaena, and leopard); yet black-backed jackals (Canis mesomelas, hereafter jackals) persist despite centuries of lethal management. This begs the question; why do jackals survive when other predators have been extirpated? Jackals are the dominant cause of livestock predation in South Africa, causing financial losses reputed to be in excess of USD 90 million per year. Consequently, many managers still kill jackals to reduce densities, and presumably livestock mortality. Smaller canids, like jackals, are highly adaptable and display variable responses to these mortality sources, which may affect management outcomes. As yet, the effects of lethal management on jackal populations have not been fully investigated. Here, we compared reproduction and dispersal between jackal populations subjected to different intensities of lethal control (farms – heavily hunted; reserves – lightly hunted and unhunted) to determine if compensatory reproduction and compensatory immigration contribute to population persistence. We predicted that: 1) hunted jackals will increase reproductive output to compensate for increased mortality; and 2) lightly hunted/unhunted reserves will act as source populations, exporting individuals to heavily hunted farms that act as sink populations. We collected demographic (age and sex) and reproductive (uterine scars) information, as well as tissue samples (DNA analysis to estimate dispersal) from harvested jackals. We analysed 12 microsatellite loci from 554 individuals. Multilocus Bayesian genetic techniques were used to estimate dispersal between jackal populations associated with these distinct land-uses. As predicted, jackals on farms compensated for increased mortality by increasing the pregnancy rate of young individuals and increasing the litter size at younger ages, thereby increasing reproductive output (compensatory reproduction). This may be ascribed to anthropogenic mortality which reduces the density of conspecifics allowing younger individuals that would be socially precluded from reproducing to reproduce. Further, spatial variation in hunting intensity induced source-sink dynamics through net dispersal from lightly hunted/unhunted reserves (sources) into heavily hunted farms (sinks). Heterogeneous hunting intensities facilitated the dispersal of jackals from reserves by reducing the density of conspecifics on farms (compensatory immigration). The lethal management of predators is the prevailing strategy to reduce livestock predation. However, the highly adaptable nature of jackals and the combination of compensatory mechanisms such as increased reproduction and immigration allow these predators to persist in the face of severe anthropogenic mortality, through the formation of a source–sink system. These compensatory processes will continue to counter population reduction efforts as long as recruitment from refuges persists. Thus, lethal management of jackals may not be an effective long-term strategy in reducing livestock predation.