Research into the mortality of black footed cats in South Africa 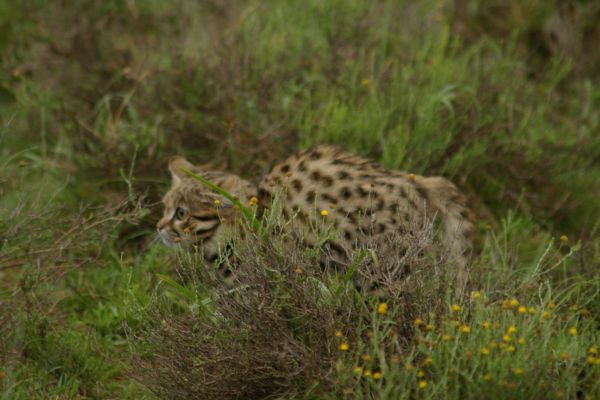 Mortality influences population dynamics and may affect a species' potential for survival. Identifying the primary causes of mortality of a species is therefore essential to understand population ecology, but is also important from a management and conservation perspective (Ruggiero et al., 1994). The relative frequency of the various causes
of mortality within a population provides information about local ecology and evolutionary pressures and reveals potential conservation issues (Collins & Kays, 2011). The knowledge of cause-specific mortality is particularly relevant for endangered species, considering one of the most important actions to reverse a species' decline is
to mitigate the most significant causes of mortality through targeted efforts (Angerbjörn et al., 2013; Simón et al., 2012). In both large and small wild cats, the majority of mortalities are often directly or indirectly human-related, with the main causes of death including hunting, poaching, retaliatory killing, vehicular collision, predation by domestic dogs and infectious diseases transmitted from domestic animals (Andrén et al., 2006; Blankenship et al., 2006; Goodrich et al., 2008; Gubbi et al., 2014; Pereira et al., 2010; Schmidt-Posthaus et al., 2002). In addition, small wild cat species are often subject to lethal encounters with larger competitors. For example, pumas (Puma concolor) were the main cause of mortality of Geoffroy's cats (Leopardus geoffroyi) in a national park (Pereira et al., 2010) and raptors and red foxes (Vulpes vulpes) accounted for 41% of deaths in Pallas's cats (Otocolobus manul; Ross, 2009). Diseases and intraspecific mortality were also important causes of mortalities in Iberian lynx (Lynx pardinus; López et al., 2014) and ocelots (Leopardus pardalis; Haines et al., 2005). The black-footed cat (Felis nigripes) is the smallest felid species in Africa and is endemic to the arid regions of southern Africa. It is currently listed as “Vulnerable” in the International Union for the Conservation of Nature (IUCN) red list of threatened species, with a population decline suspected over the general range (Sliwa et al., 2016). Since 2005, the Black-footed Cat Working Group has been conducting long-term
monitoring of black-footed cats in two study areas in South Africa. In this study, we used data from radio-collared animals to evaluate the relative importance of the different causes of mortality in this population.