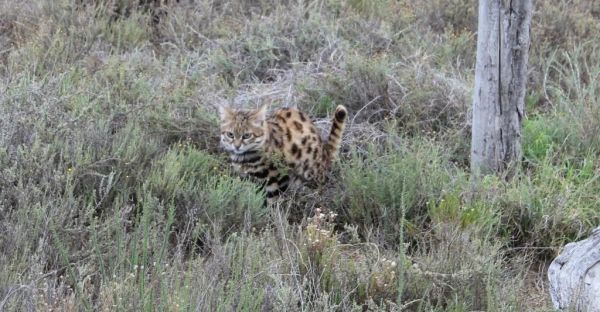 The black-footed cat (Felis nigripes) is sympatric with several species of larger carnivores, although it is not known how this species partitions resources with potential competitors. From 2006 to 2008, we captured, radio-collared, and monitored 3 adult black-footed cats on Benfontein Game Farm in South Africa.

We investigated their spatial, habitat, temporal, and dietary overlap with Cape foxes (Vulpes chama), bat-eared foxes (Otocyon megalotis), and black-backed jackals (Canis mesomelas) that were monitored during a concurrent study. Annual home range sizes of black-footed cats were 7.1 km2 for the adult female, and 15.6 and 21.3 km2 for the two adult males. Home ranges overlapped completely with the canid species, whereas core areas overlapped the most with jackals (79%), compared to Cape foxes (28%) and bat-eared foxes (21%). Within home ranges, black-footed cats selected habitats in proportion to availability, similar to Cape foxes, but in contrast to jackals and bat-eared foxes. Black-footed cats were primarily nocturnal, and their activity patterns significantly differed from jackals.