The black-footed cat Felis nigripes (Burchell, 1824): A review of the geographical distribution and conservation status 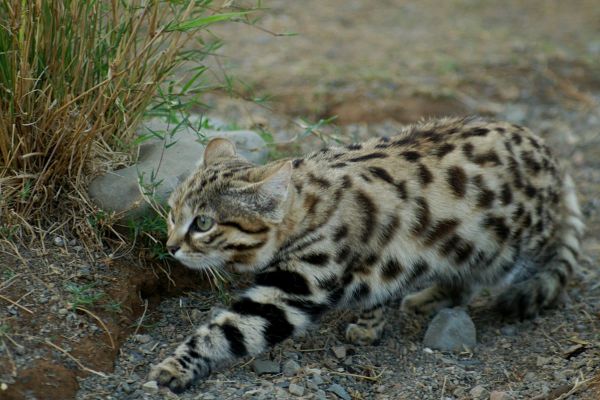 The Black-footed Cat (Felis nigripes) is one of the rarest cat species in Africa and is restricted to the southern African subregion. A review of historical and current geographical distribution ranges was made from 2006 to 2014. Locality records (790) were assembled from literature reviews, museum records, field surveys, web-based resources and citizen scientist observations. Maps were digitised and analysed using Geographical Information Systems.

Historical geographical distributions contained a limited number of records and underestimated the range of the species. The current mapping suggested a wider but more fragmented geographical range than previously assumed. A replicable mapping method was developed to estimate population sizes in South Africa and regionally to allow for more informed decision-making in future conservation assessments. Until recently, the species had a South African national conservation status of Least Concern that is in the process of being uplifted to Vulnerable. The findings here support this change in conservation status, as well as the continued IUCN global listing of Vulnerable.

Apart from the already acknowledged threats to the species, an additional eleven conservation risks were identified and ranked according to severity. This information was used to make management recommendations and identify research priorities for the species.