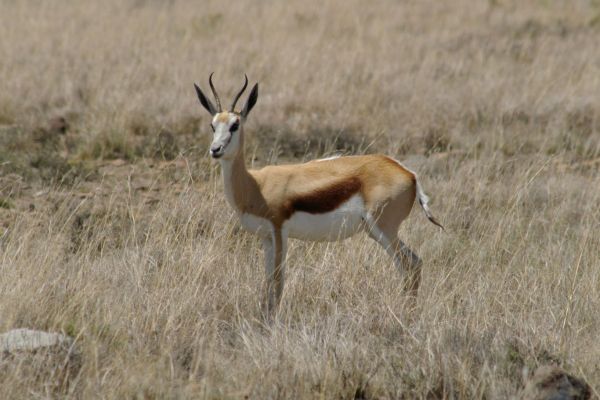 Abstract
Feeding ecology of carnivores is integral to understanding their role in the ecosystem and the effect they have on their prey
species. This study aims to better our understanding of Black-backed jackal feeding ecology in a fairly natural ecosystem,
to contribute towards more informed depredation management in surrounding agri-ecosystems. Scat analysis was used to
investigate the diet of Black-backed jackal inside a 5590 ha formal protected area, namely Maria Moroka Nature Reserve,
which is surrounded by cattle and small stock farms. The six main prey groups identified from 334 scats were mice, springhare,
antelope (c. 98% Springbok), hare, small carnivores and fruit. Rodents (mice mean monthly percentage occurrence 36%,
springhare 31%) were utilized the most frequently, followed by antelope (Springbok 22% Occ; Blesbok 0.51%). The next most
used prey group was small carnivores, present in 8% of scats. Hares and fruit, but also birds and invertebrates, were taken
sporadically. No stock remains were found in the scats. Very similar results were obtained when volumetric contributions were
calculated, resulting in mice (mean monthly contribution = 33% Vol; Importance Value, IV = 15.2), springhare (30% Vol; IV
= 11.9) and antelope (24% Vol; IV = 10.0) being the most important prey items. Small carnivores (8% Vol) had an Importance
Value of 1.2, and all other prey groups scored less than 0.4 IV. The wide variety of prey used, together with their monthly
fluctuations (which for some groups could be coupled to availability) and prey switching between the three most important
prey items mice, springhare and antelope, support opportunistic feeding behaviour by Black-backed jackal in the study area.
The results also confirmed that Black-backed jackal does utilize Springbok as a major food source, and that this usage peaked
during the two periods when Springbok lamb at Maria Moroka Nature Reserve. These periods do not only coincide with the
Black-backed jackal pupping and dispersal seasons, but also with the two sheep lambing seasons in the central and southern
Free State Province.