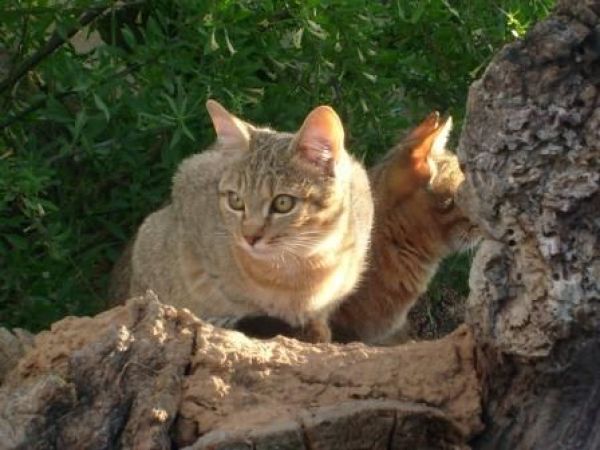 The seasonal feeding habits of the African wildcat, Felis silvestris cafra, in the riverbed ecotone of the Kgalagadi Transfrontier Park were investigated over a period of 46 months. The diet was analysed through visual observations on eight habituated (three female and five male) radio-collared wildcats, supplemented with scat analysis. Murids formed the bulk of the biomass in the diet (73%), followed by birds (10%) and large mammals (> 500 g) (9%). Although reptiles (6%) and invertebrates (2%) were frequently caught they contributed less to the overall biomass of the diet. There were significant seasonal differences in the consumption of five food categories that related to changes in availability. Fluctuations in prey abundances could be the result of seasonal rainfall and temperature fluctuations, or long term variability in rainfall resulting in wet and dry cycles. As predicted the lean season (hot-dry) was characterised by a high food-niche breadth and high species richness.

Despite sexual dimorphism in size in the African wildcat, both sexes predominantly fed on smaller rodents, although there were differences in diet composition with males taking more large mammals and females favouring birds and reptiles. These results indicate that African wildcats are adaptable predators that prefer to hunt small rodents, but can change their diet according to seasonal and longer-term prey abundances and availability.